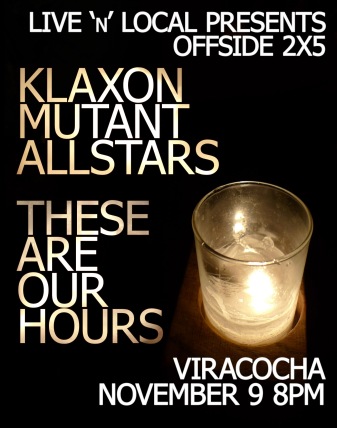 Earlier this year I embarked on a major adventure with Alex Pinto—SF Offside—a three-night festival showcasing some of the best from the local jazz/creative music scene. While we are already working hard toward next year’s festival, I wasn’t quite ready to let go of this year’s incredible experience. In particular, I wanted to bring together the two quintets that debuted at the festival into one night of awesomeness called Offside 2×5.

These Are Our Hours is one of many projects led by composer, saxophonist, and clarinetist Aram Shelton, and includes members of the Oakland Active Orchestra. Alex and I had originally invited OAO to close out the first night of the festival, but given the significant size of that collective, the logistics didn’t work out. We kept talking with Aram about possibilities, however, which ultimately resulted in him putting together this quintet to perform all new compositions, specially written for the festival. And thus was born These Are Our Hours. 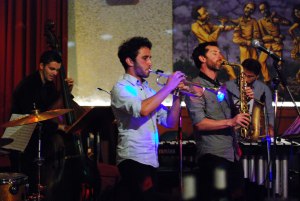 In addition to Shelton on alto sax, TAOH features one of my current favorites, the very talented Mark Clifford on vibes, highlighted to great effect in Shelton’s arrangements, as well as Theo Padouvas on trumpet, Kim Cass on bass, and Sam Ospovat or Shaun Lowecki on drums—a crew of young and talented players. Since their debut at Offside in May, they’ve been building a strong body of work playing a monthly at Bar 355 in Oakland. One Tuesday recently, I got to see them play the Uptown in Oakland with Alex Pinto’s trio opening, part of the ongoing Active Music Series. That was a great evening of music with a surprisingly full house for a Tuesday night, so I’m excited to hear TAOH play again, particularly at Viracocha, where the sound is so good. They will be playing the first set of the evening.

Meanwhile, check out this nice article in the San Francisco Chronicle about Shelton, whose Chicago quartet recently performed at the Monterey Jazz Festival.

Klaxon Mutant Allstars is an intergalactic confederacy of Bay Area players—trumpeter Henry Hung, saxophonist Kasey Knudsen, keyboard player Colin Hogan, bassist George-Ban Weiss, and drummer Eric Garland—that emerged from the Amnesia Wednesday night jazz jam. While all five write for the ensemble, Hung and Garland do the bulk of the composing. The story of how KMA came to play the third night of Offside is not a whole lot different from the TAOH story. I was talking with George Ban-Weiss about Atomic Roger, his trio with Eric Garland and guitarist extraordinaire Mike Abraham (these three also play together in violinist Mads Tolling’s Grammy Award-winning quartet). Abraham, who took over the Wednesday night jam when Mitch Marcus moved to NY, has since moved to LA, so logistically it didn’t work out for them to play the festival.

George told me about a new group he, Garland (who now leads the Wednesday jam), and some others had formed, but at that point they did not yet have a name. I knew all the players involved and was already really impressed with Garland as a composer, not to mention bad-ass drummer. So, we invited the group to play at SF Offside, they promptly came up with a name for themselves, then performed an appropriately stellar (or interstellar?) set on the last night of the festival.

We were very lucky to have Bay Taper in attendance that night, so the entire evening was documented. Craig from Wedge Radio also covered the show on his blog.

For a little taste of what’s to come in November, listen to this Bay Taper recording of Klaxon playing a delightful Hung composition called “Jamie Moyer” (Wedge Radio explains the joke for those of us that don’t get sports references). The group also recently spent some time in the studio, so their debut recording will be released some time in the new year.

I’m very excited to be presenting these two quintets in one show. While different stylistically, both have mastered that fine balancing act between structure, melody, and rhythm on the one hand, and openness, improvisation, and inventiveness on the other. The music is accessible while also full of surprises. So, please, save the date!

It’s going to be a night of ridiculously good, fresh new music.

2 thoughts on “Offside 2×5: Klaxon Mutant Allstars & These Are Our Hours”